Ang Mo Kio Chinese Methodist Church was instituted as a local conference on 24th October 1982. The church has grown gradually over the last 37 years, established the second worship service on 12th July 1998, started the China Ministry Worship Service since 25 Dec 2005 and took on the “Lai Bai Sheng” Dialect Worship Service since Aug 2007.

We aspire to become a Community Church that is filled by the Lord and overflowing with Love. The mission of our church is to be “A Beacon in the Community ~ Enter the Community to Bring men to Christ”. The theme for our church this year (2009) is “Walk together in unity of Heart to build the House of God – New Heart & Faith”. Under the guidance of the Holy Spirit, brothers and sisters walk and labour together in unity of heart, to redevelop the church for God’s glory, striving for spiritual growth and to build a congregation that love God and people.

Church redevelopment is a project that requires strong faith and matured spiritual life. This project will surely help our brothers and sisters in their spiritual growth, and exercise their faith in the course of fund raising. 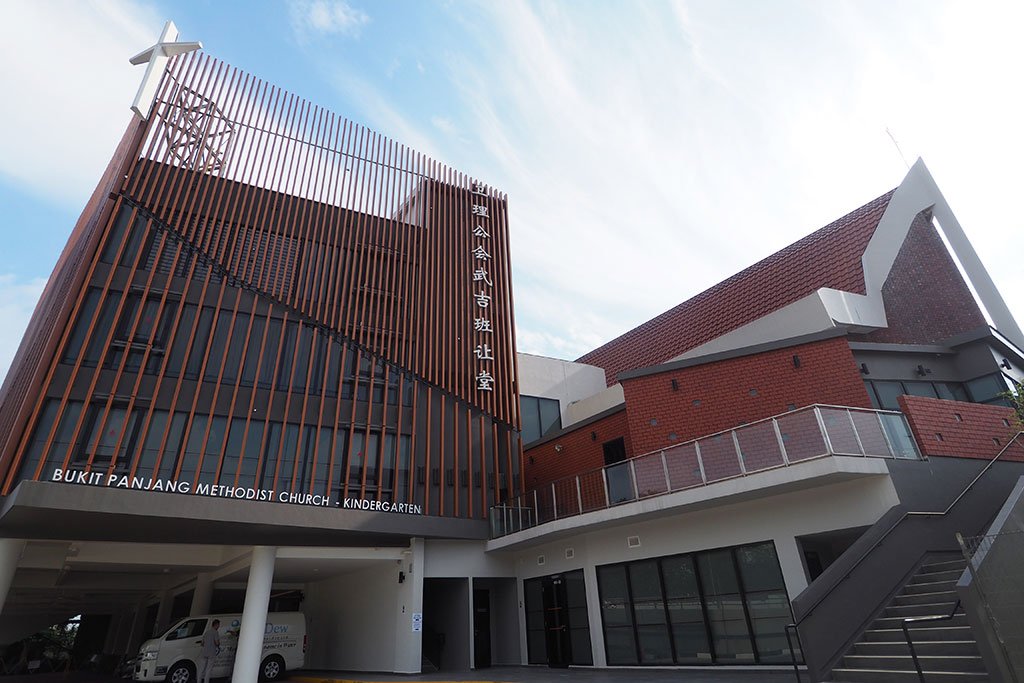 Through the years, God has enlarged His tent as shown by the growing Hokkien, Mandarin, English and Youth congregations. We are now a multi-ethnic and multi-generation church worshipping at the adjacent locations of 488 and 496 Upper Bukit Timah Road.

Charis Methodist Church grew from the English congregation of Geylang Chinese Methodist Church and was constituted as a church in 1989. Though a fairly young church, Charis has grown over the years. Presently she has 2 English Services and 1 Mandarin Service. There are activities for children of all ages, the youths, adults and senior citizens. To assist the working parents, Charis has also set up 2 Before and After School Care Centres in Geylang East.

Despite the turbulence in world affairs and the many difficulties faced by our Church, more than hundred years passed by as a day. The work of building up the church continued unabated. Praise be to God for His Grace and Guidance!

The first hundred years of our Church can be broadly divided into two periods:

The First Period: 1897 to 1936. The early Christian migrants from Foochow, China, were poor and many had to earn a living by pulling rickshaws. They wanted to have a pastor who could speak and preach to them in Foochow. Accordingly, Rev. Ling Chin Mee was appointed the first pastor and the Foochow Methodist Church was formed in 1897.

For the first forty years from 1897 to 1937, the Foochow Methodist Church had no church building of its own. Having a congregation of less than 100 persons, worship services were conducted in borrowed premises -initially in the little church building at Middle Road and later moving to ACS building at Coleman Street and to Tamil Methodist Church at Short Street. This first period was filled with hardships and it was only through faith, patience and obedience to the Lord that our Church held firm.

The Second Period: 1937 to 1997. The next sixty years from 1937 was a period of steady progress both in building churches and in spiritual growth.

Geylang Chinese Methodist Church is founded in cosmopolitan Singapore since 1905. People of diverse nationalities converge and interact around us and with us.

GCMC serves a fraction of these nationals. Beside the locals, she welcomes and cares for Malaysians, mainland Chinese, Vietnamese, Thais and Indonesians. GCMC also ministers to students in the Geylang Methodist School (Secondary). The church seeks to be an active partner alongside the school in areas like tuition, student welfare and character building.

GCMC continues to be an involved participant in the position and situations where God has placed her.

From the English congregation of Telok Ayer Chinese Methodist Church, this young congregation was birthed as a testament of God’s unfailing grace – a growth from grace to grace. The church’s special emphasis on age-groups ministry highlights the commitment to nurture one and all, to grow in the grace and knowledge of Jesus Christ. 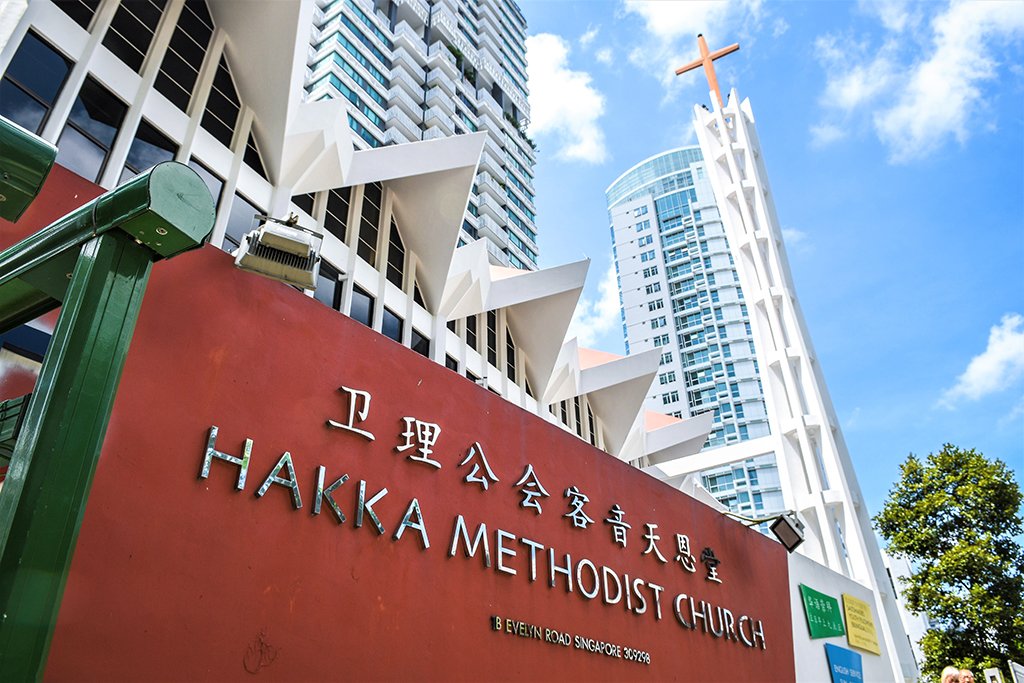 From its humble beginnings, the sturdy growth of the Singapore Hakka Methodist Church is well represented by the thousand pound aluminium cross which was put in place with the help of two RAF helicopters, back in 1966. In holding up the cross of Christ, the church continues to draw all to Jesus Christ. 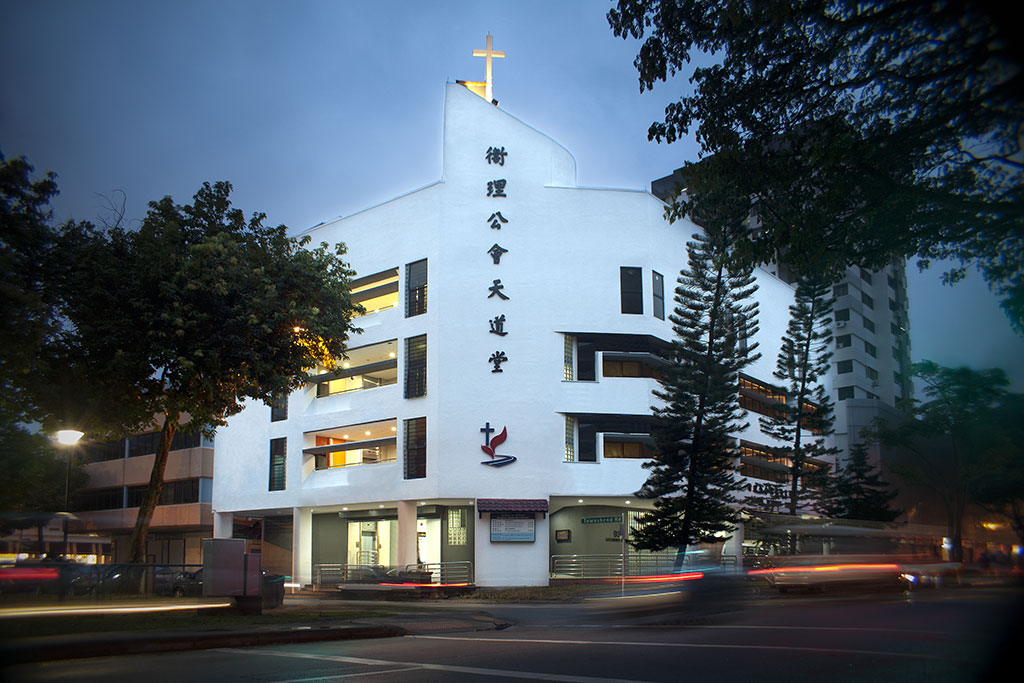 Hinghwa Methodist Church was founded in 1911. The church was begun by Rev Dr W. N. Brewster a missionary working in the Fujian Province of China.

The church purchased her first property, a shop-house in Sam Leong Road in 1933. Subsequently, in 1941, she bought the present site at Kitchener Road. In April 1986, the present 4-storey building was completed and was dedicated on 27th Nov 1986.

Hinghwa Methodist Church is conveniently located within the Lavender community at 93, Kitchener Road, Singapore 208510. The church seeks to fulfill her God-given vision of being a lighthouse for Christ and is very actively reaching out to her neighbourhood.

Before Holy Covenant MC was instituted as a local conference, it was a preaching point of Telok Ayer Methodist Church. The church premises at Wishart Road was built with the vision to evangelise and meet the needs of the residents as well as the members of Telok Ayer CMC who live in the Telok Blangah area. It was inaugurated by Bishop Hobart B Amstutz ion 29th December 1963. Shortly thereafter, Hokkien service was started. The Mandarin services began in the 1980s.

Holy Covenant was officially instituted as a local conference on 1st January 1997 and the name Holy Covenant was chosen as a remembrance of God’s Covenant of Grace. The vision of Holy Covenant MC is to be a disciple church. Our goal is to lead people into a covenantal relationship with God, to worship and praise Him, to fellowship, to watch over one another and grow in love, to build and equip the disciples in the Word and to serve in His power